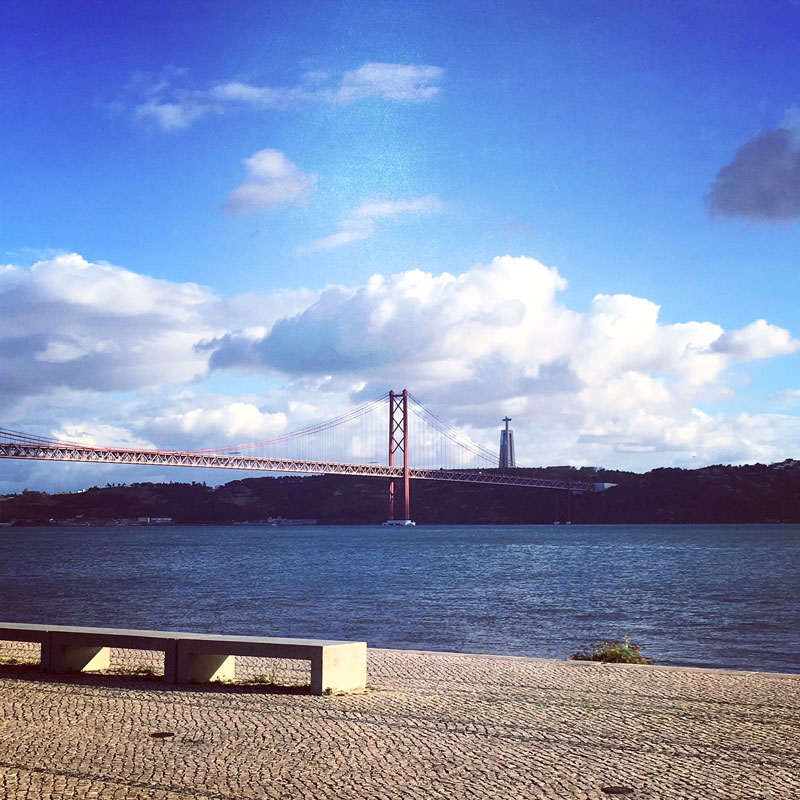 I’ve been giving a lot of thought to a project I would like to embrace. I love writing, and expressing my thoughts and feelings through words, and blogging was – once upon a time – a wonderful outlet for that. It hasn’t been, not for a while, a wonderful place for that, and I would like that to change. For me, I mean.

I remember vividly the evening I created my first blog and wrote my first post. It was end of October, probably the 30th, back in 2006. It was my last night in Buenos Aires, Argentina, before returning to Lisbon. I had been there for two months, visiting my then-boyfriend, now-husband. I had decided I would be moving there, but needed to come to Lisbon to close up shop (and properly move there). That night, I was alone at home, as he had a business trip to Santiago de Chile he could not reschedule, and I took the leap of creating a blog at blogger. (Remember blogger?)

I named my blog “Entre Lisboa e Buenos Aires” (which translates as “Between Lisbon and Buenos Aires”), which was a good description of how I felt: on the one hand, I loved my hometown of Lisbon; on the other, my future seemed to live in that beautiful, Latin American city.

Those first few years of blogging were like a honeymoon, if there’s such a thing when it comes to writing and sharing thoughts with an unknown audience. I had my eyes peeled for everything, and found a way to write about the little things I noticed here and there. In April 2007, I moved to Argentina, and I didn’t have to be very creative in noticing those small things, because everything was new to me. Buenos Aires was love at first sight, with all its beauty and all its flaws of a gigantic city (the greater Buenos Aires has more inhabitants than the whole country of Portugal, just to give a sense of scale).

I wrote in Portuguese, my mother tongue, a language I love. It has subtleties – like many other languages, I suppose – and it felt good to be able to explore and play with those nuances while, at the same time, presenting my new reality living in the “South Cone”. I discovered new tastes (hello ceviche! And sushi, that was the moment I fell in love with you), looked at streets, buildings and corners with the eyes of a foreigner who actually had the time to be there permanently.

But those first months weren’t all pink and rosy. I fell ill and underwent several surgeries, and the weight of the distance made itself very evident. It took me a while to get better after the experience, but eventually I did.

Blogs, at that time, were journals people used to express themselves and their creativity. Comments were one of the ways readers connected to the author, and a way to create community. Reading blogs and interacting with other bloggers made me want to create more; to experiment more; to strive to be less “perfect” and more “daring”. I rediscovered knitting and I experimented with different illustration techniques. I took painting classes and went back to studying German, a language I absolutely love. I made friends with new people, both in Buenos Aires and in the online world.

Blogs then became a powerful platform and blogging suddenly became a business. And although I get it – lots of people were reading blogs and many of us were writing blogs, which takes up a lot of time and if you can monetize it, then why not – that evolution also saddened me. Blogs lost that fresh, spontaneous feeling they had and posts became ways to sell things.

More or less at the same time, I moved from Argentina to Panama, and that was a tough change for me. Looking back, I think I wasn’t as comfortable sharing feelings and thoughts as I was before, not only because blogging now had a more commercial and practical purpose (mostly sell things, or create brand awareness), but also because I didn’t have the same love affair with Panama I lived earlier with Buenos Aires. Instagram also came to be around that time, and that platform – at least in its infancy – seemed to have the freshness to visually express myself. Those were the days when the only picture format was square and posts were chronological. (Oh, Instagram, what have you done to yourself? But that’s a conversation for another post.)

In 2013, I moved back to Lisbon, Portugal, after six years in Latin America. I was happy to come home, after being abroad and far away. But coming back wasn’t easy, or at least as easy as one would expect when going back to your home country. Because everything is different now: friends and clients have moved on, created new routines while we were away; the city itself had changed. And, once again, we had to start anew.

That Summer, I took a business and marketing online course (Tara Gentile’s then-called “10 Thousand Feet” course, which I highly recommend) that changed a lot in the way I worked, found new clients and created new business opportunities for myself. It also fundamentally changed the way I approached blogging: it was now a way to intentionally connect with my audience, create awareness and sell my products and services, and I started delivering my posts both on my website and via e-mail.

Writing to sell my products and services was both fantastic and also gut-wrenching, in the sense that it created a chasm between what I needed to write and what I felt like spontaneously writing. I tried filling that void writing as much as possible from my experience, or from my heart, one could say; but I always missed that freshness of the first years.

Fast forward to today: after long pauses, I’ve been craving that spontaneity that blogs offered in their infancy, the connection with the audience and the sense of community it created. I’ve been finding them in other platforms, such as through Anita no Trabalho, the podcast I co-created and co-host with my friend and podcast partner Eliana; through Instagram, where I’ve been meeting wonderful new people; or even through embroidery, via my free online embroidery e-course and my paid air Embroidery Club.

And that’s where we are today: craving this space for expression, in a world that has no time to read anything longer than three lines (let alone the many paragraphs above).

This post is the first, I hope, of a series of essays I intend to write and publish, with the goal of (re)creating, even if only for myself, that sense of space. If you want to follow along, you can check back this space or read posts directly in your e-mail inbox.