If you wish to see more photos, visit the post I wrote in portuguese.

After some days, I´m resuming my posting about our trip to Bolivia, on the last week of May, which is the beginning of winter. Although Bolivia is not known for having four seasons, winter comes with particularly chilly temperatures and the best place to experience the shivering cold was definitely Uyuni.

But Uyuni is not known for being cold in winter. The reason people travel there today is to visit its salar. It is a huge, huge “lake” of salt, with a diameter of 140km. Apparently it is about 11m thick and underneath there are some water “channels” that, at some point come up and break the surface. This water is loaded with lithium and other minerals and is believed to be helpful in curing skin conditions.

Well, but all that isn´t what is the most striking characteristic of this place: its other wordly appearance is what makes a person feel dizzy. And, as the guides told us, it can be very disorienting if the sky is cloudy, as mountains in horizon disappear and everything becomes white.

Going in winter means that most of the yearly rainfall is avoided, as it occurs mostly during the summer months of January and February. We got all the cold, wind and sun one could expect at this time of the year. Nevertheless, I don´t regret it the tiniest bit. The visit to the salar was probably one of the (travelling) days best spent in my whole life. Its white neverending surface brings the visitor to the moon and back, when realising that on the other side there are mountains with regular coloured earth.

Travelling from its entrance in Colchani to the volcano on the opposite shore was a surreal experience: at some point there were no other landmarks to be seen and only the guides could give us the security of going to a specific place. It is terrifyingly beautiful and striking; it´s a lanscape that cannot be forgotten. 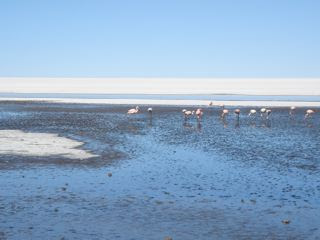 We had lunch on the opposite shore, near the small lakes that appear between the salt and the earth. Thanks to the water there´s some small vegetation and contrasting flaming pink flamingoes. It´s incredible how in such a short distance (just a few metres), one goes from no life at all, just salt, into a green tapestry with fluorescent flamingos drinking water and keeping their balance on just one leg.

This beautiful scenery made our meal the most special one throughout the trip. It was a simple meal though, but who cares about that with such scenery and great company.

Speaking of which, I cannot help myself and mention (again?) how good most of the guides were: we had a guide and a driver for just the two of us and they never, ever rushed us. They took their time to explain things and answered all our questions. They always respected our times as well, as walking and climbing, at this altitude, was a bit of a hard workout. Entrance to monuments was always included and we never had to pay any “extras”. These are the tiny details that made this trip even more special, I think.

Going back to the salar, no trip is complete without going to Isla Incahuasi, an island of earth in the middle of the salt lake. It´s funny how one can get to an island by car, but that´s really how it goes. From the top of the hill, this is the view to be had: