Blue skies like these? I´ve only seen them in Portugal. Really, there are no blue skies like in my home country but the ones in Lake Titicaca can come pretty close. I wonder if it is because there´s so little moisture in the air (the same happens in Portugal during the summer) or because the air is so thin. I don´t know but it just reminded me of home. But a cold, cold home.

The trip to Lake Titicaca started early. In the non-heated bus they gave us huge blankets to cover ourselves, which was a very good idea. We saw the break of dawn during our trip from La Paz and the sunrise behind the mountains was beautiful.

Falling asleep and waking up again we would have a different landscape. At a certain point, among all the dryness that describes the Andes in this place, there´s a huge sea. We know it´s a lake, but it is so big you cannot see its opposite shore.

The arrival point is Copacabana, a small town that serves those tourists that are travelling to or coming from Isla del Sol, the island in the middle of the lake.

In Copacabana there´s a beach that, albeit beautiful, smells like urine. Ant then there´s the strange (for this latitude and longitude) mudéjar-style church. If it weren´t for the sharp temperatures and the lack of oxygen in the air, I´d say – by looking at these pictures – that I was somewhere in the south or Portugal. But I guess I´m mentioning Portugal way more often than Copacabana or Bolivia, so I´ll stop comparing.

The main attraction of the church is the “Vírgen de Copacabana”, but what I really liked the most is the beautifully sculpted wooden doors. They tell the story of the Vírgen´s sculptor in a way that looks like a cartoon. It touched my illustrator´s heart. 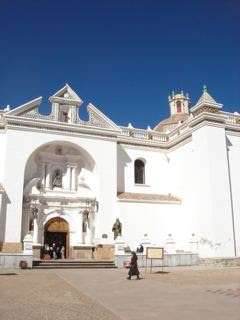 Isn´t the blue sky something special? 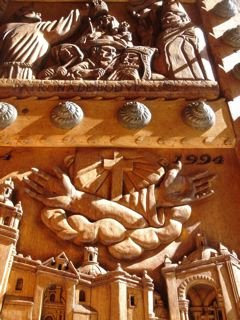 The clouds were what struck me the most – I felt like squeezing them.

We then took a boat to the island. 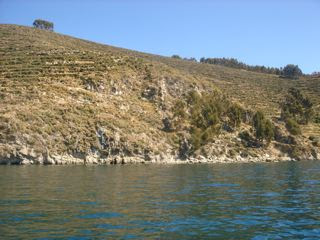 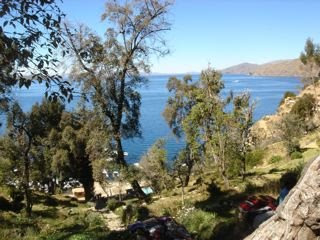 The landscapes were beautiful and, once again, reminded me of home. But I won´t get into that. The island was beautiful and the series of snowed peaks were visible in the distance, as a background to the crystal clean lake waters and the smaller hills on the lake´s shores. But not everything was perfect because we had to leave the island sooner than we would have wanted. That was something both of us didn´t enjoy much about the tour: we spent such a long time travelling and waiting for other travellers just be a couple of hours on the island. It felt too little time to actually see something.

It gave us enough time for this, though: 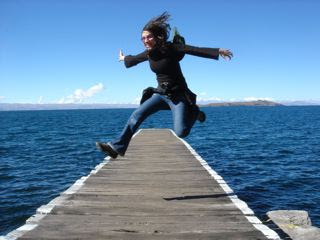 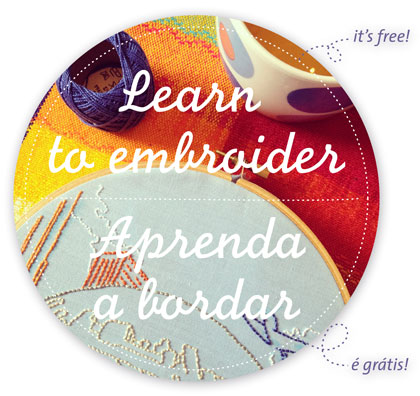